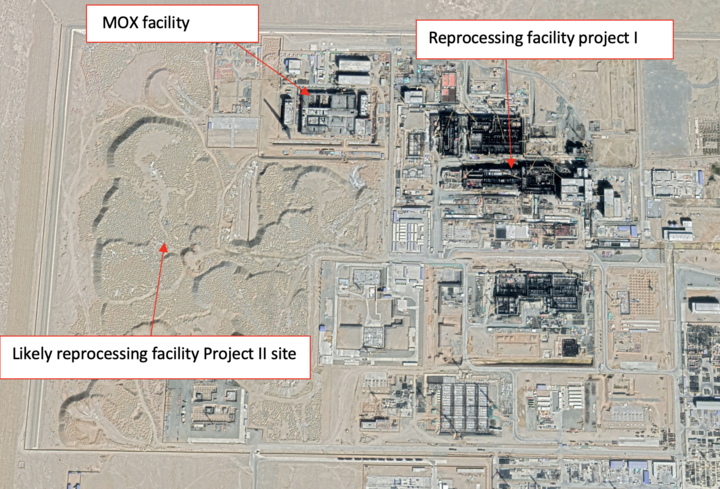 Commercial bidding and purchase documents and other accounts suggest China is likely to start construction of a second spent fuel reprocessing plant of the same capacity and at the same site as its first such plant, the CNNC Gansu Nuclear Technology Industrial Park in Jinta, Gansu province.

Since 2015, China has been constructing a civilian "demonstration" reprocessing plant for spent light-water reactor fuel, with a capacity of 200 tons per year (tons of Heavy Metal, tHM/year). The construction activities and equipment purchases suggest that this first plant (Project I) could complete its civil engineering stage and begin equipment installment in late 2020. Project 1 is expected to be operational in 2025. The start of work on the second reprocessing plant (Project II) in late 2020 or early 2021 suggests that it could be commissioned before 2030.

In contrast to the launch of construction of Project I, there have been no official statements or news coverage so far concerning this new facility. There have been a number of announcements, however, including bid requests for various studies and services for "spent fuel demonstration reprocessing plant project II":

Since 2018 CNNC has also been building a demonstration mixed uranium-plutonium oxide (MOX) fuel fabrication line with a capacity of 20 tons/year near the demonstration reprocessing plant. In 2019, the company started to order equipment for the MOX fabrication line. The civil engineering stage was expected to be completed and equipment installation started in 2020, with the plant to be commissioned by 2025.

The two 200 tHM/year per year reprocessing plants, operating at 50% capacity, and the 20 tons per year MOX plant could support the plutonium needs (about 2 tons of plutonium) of China's two CFR600 fast reactors under construction at Xiapu, Fujian Province. Construction on these reactors started in December 2017 and December 2020, and they are planned to be operational in 2023 and 2026 respectively. The first CFR600 will commence operating with HEU fuel rather than MOX; Russia's TVEL contracted in 2019 to supply the initial HEU core and reloads for seven years. It is currently unclear if the second reactor also will start out with HEU fuel or operate only with domestic MOX fuel.

Based on the MOX fuel requirements of Russia's prototype BN800 fast reactor (an initial core of 15.8 tons of MOX with 20.5% plutonium content), each CFR600 could require an initial core of about 10 tons of MOX fuel. Assuming the CFR600 MOX fuel contains about 20% plutonium, the initial MOX core would require about 2 tons of plutonium. The 200 tons of spent light water reactor fuel processed annually by each of the reprocessing plants that are under construction would also contain about 2 tons of plutonium. Operating at a capacity of 20 tons per year the demonstration MoX plant could produce these two initial cores in a year. Thereafter, each CFR600 may require about 5.5 tons per year of MOX, containing about 1 ton of plutonium (assuming each has a power of 1500 MWt, and average burnup of 80 Mwt-day/kgHM, and a capacity factor of about 80%).

The MSZ Plant in Electrostal, near Moscow (part of the TVEL division of Rosatom), set up a production line that will manufacture uranium fuel for China's CFR-600 fast neutron reactor. According to the fuel supply contact that was signed in...