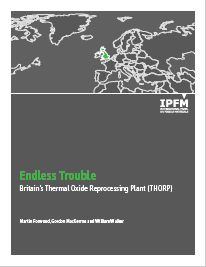 A new report by Martin Forwood, Gordon MacKerron and William Walker assesses the operational and political history, legacies and lessons of Britain's Thermal Oxide Reprocessing Plant (THORP), which is now undergoing a clean-out prior to its final shutdown.

In the first part of "Endless Trouble: Britain's Thermal Oxide Reprocessing Plant (THORP)" (PDF), Martin Forwood (who died in 2019) and Gordon MacKerron look at THORP's justification as part of Britain's plans for its nuclear energy program, technology development and economic growth, and the plant's actual operating experience after it was completed in 1992. The amount of domestic and foreign spent nuclear fuel that was treated, the plutonium separated, and the plant's economics, all proved to be far below what had been expected by its advocates. The failure of the Sellafield MOX Plant to produce mixed uranium-plutonium oxide (MOX) fuel for nuclear power reactors using plutonium from THORP contributed to the UK now having the largest civilian plutonium stockpile in the world, which needs to be safely stored and managed. There is no clear path for disposition of this plutonium, which is expected to take a long time and be costly. THORP also has left a large and expensive decommissioning challenge and the need to find ways to manage the remaining spent nuclear fuel at the site.

In the Report's second part, written as a policy drama in three Acts, William Walker explores THORP as a political and bureaucratic project. He traces its history from the flawed Windscale Inquiry, the drawing up of entangling contracts and agreements with foreign utilities and governments, the UK Parliament and Government's continual submission to the industry's demands, the extraordinary attempts to ship plutonium to THORP's customers across the High Seas, to the project's closure and its operator, BNFL's, overthrow after decades of political struggle and wasted effort. He concludes "The trouble in THORP's case was that the technically incorrect decision was pursued by a frequently deluded, inefficient and self-serving technocracy, its power rooted in an alliance between sections of the state bureaucracy (notably the Department of Trade and Industry) and a state-owned industrial monopoly (BNFL)." He offers five broad admonitions to policy-makers responsible for embarking on large, costly and risky technological projects:

The report includes a chronology of THORP from the start of plant design studies in 1974 to the beginning of the plant's shut down in late 2018.

Martin Forwood (1940-2019) was the campaign coordinator for Cumbrians Opposed to a Radioactive Environment (CORE) for many years, in which capacity he oversaw local campaigns against British nuclear policy on reprocessing and radioactive waste disposal.

Gordon MacKerron is Professor of Science and Technology Policy at the Science Policy Research Unit, University of Sussex, and a member of IPFM. He chaired the UK government's independent Committee on Radioactive Waste Management from 2003 to 2007.

William Walker is Emeritus Professor of International Relations at the University of St. Andrews, Scotland, and a former member of IPFM. He is the author of Nuclear Entrapment: THORP and the Politics of Commitment (Institute for Public Policy Research, London, 1999).