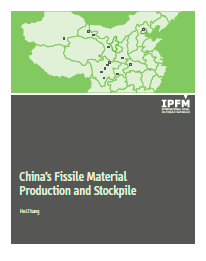 The report provides new evidence to constrain the operating histories for China's Lanzhou and Heping gaseous diffusion enrichment plants. Lanzhou stopped HEU production for weapons in 1980 and shifted to making low enriched uranium (LEU) for civilian power reactors and possibly for naval reactors. It was shut down on 31 December 2000 and in 2017 was demolished. The Heping plant may still be operating but not producing HEU for weapons. China also has centrifuge enrichment plants but they are believed not to produce HEU for weapons.

The new report also offers new details on the operational experience of the Jiuquan and Guangyuan weapon plutonium production reactors. China also used these reactors to produce tritium for weapons. The reactors were closed in the 1980s and have been undergoing decommissioning.

Despite the end of HEU and plutonium production for weapons thirty years ago, China has made no official policy declaration formalizing this situation.

The report offers an improved estimates of the amount of HEU and plutonium China has produced and of its current stockpiles. China's stockpile of weapon-grade HEU (assumed to be 90 percent uranium-235) is estimated to be about 14±3 metric tons, lower than the previous IPFM estimate. The stockpile of plutonium available for weapons is estimated to be about 2.9±0.6 tons, significantly larger than the previous IPFM estimate.