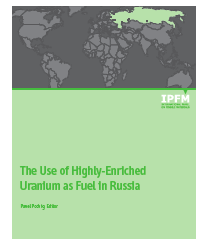 A new research report, The Use of Highly-Enriched Uranium as Fuel in Russia, (PDF copy) released by the International Panel on Fissile Materials (IPFM), provides unprecedented details of the military and civilian use of highly enriched uranium (HEU) in Russia, the country which holds the world's largest stockpile of this nuclear weapon-usable material. Russia's HEU stockpile is estimated to be about 680 tons and Russia currently operates more HEU facilities than the rest of the world combined. It is also the only country producing HEU for export.

Edited by Pavel Podvig, a researcher at the Program on Science and Global Security, with contributions by six other leading Russian experts, the report describes Russian programs that use HEU as fuel or have used it for this purpose in the past (as opposed to HEU in weapons use). Russia uses HEU to fuel military and civilian naval reactors, fast neutron power reactors, plutonium and tritium production reactors, research reactors, and critical assemblies. It currently has 58 reactors and critical assemblies that use HEU on land and over 50 HEU-fueled naval reactors. As of 2017, Russia is estimated to use about 8.5 tons of HEU of various enrichments annually, a large fraction of which is weapon-grade material.

The large number of HEU facilities in Russia means that substantial amounts of HEU are constantly moving through the fuel cycle, creating nuclear security risks. HEU poses special concerns since it can be used relatively easily in a simple nuclear explosive device by states with limited nuclear weapon expertise or even by non-state actors. Over the past several decades - and especially since 9/11 - there have been high-level international initiatives to address these risks, especially for HEU in civilian applications.

The new report assesses Russia's contribution to the effort to convert research reactors from HEU to non-weapon-usable low-enriched uranium fuel, and Russia's efforts to repatriate fresh and spent HEU fuel it had supplied to research facilities abroad. It contains a comprehensive list of Russian HEU facilities, a list of all Soviet-origin reactors outside of Russia, and data on the returns to Russia of HEU fresh and spent fuel from these Soviet-origin reactors abroad. The report also evaluates the organizational structure, rules and regulations that govern the security of HEU in civilian research facilities in Russia.

The report finds that, while Russia has been active in returning its HEU from research facilities abroad and has closed down some domestic HEU facilities, it has not made HEU minimization a priority. On the contrary, it is working on a number of new projects that involve the use of HEU and in 2012 resumed production of HEU for export. Thus far, this HEU has been shipped to China's Experimental Fast Reactor, France's Jules Horowitz reactor, and Germany's FRM-II reactor.

The report argues that securing Russia's commitment to this goal requires development of a comprehensive global HEU minimization strategy. Given the variety of applications that use HEU worldwide, such a strategy should include a consistent approach to the use of HEU to fuel high-performance civilian reactors, defense-related research facilities, and naval reactors. The report concludes that, eventually, this effort also must address the material security risks associated with HEU stocks for weapons.