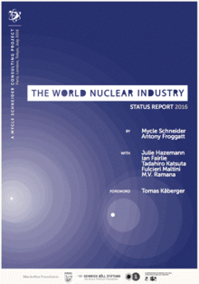 The World Nuclear Industry Status Report 2016 (WNISR) was released on 13 July 2016 in Tokyo. The report provides a comprehensive overview of nuclear power plant data, including information on operation, production and construction. The WNISR assesses the status of new-build programs in current nuclear countries as well as in potential newcomer countries. The WNISR2016 edition includes again an assessment of the financial status of many of the biggest industrial players in the sector. This edition also provides a Chernobyl Status Report, 30 years after the accident that led to the contamination of a large part of Europe. The Fukushima Status Report gives an overview of the standing of onsite and offsite issues five years after the beginning of the catastrophe. The Nuclear Power vs. Renewable Energy chapter provides global comparative data on investment, capacity, and generation from nuclear, wind and solar energy. Finally, an annex to the report presents a country-by-country overview of all 31 countries operating nuclear power plants, with extended Focus sections on Belgium, China, France, Japan, and the United States.