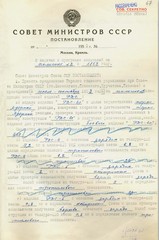 [A version of this post first appeared at RussianForces.org]

Site AtomHistory.ru published a very interesting document from the early days of the Soviet nuclear weapons program. It's the first page of the Decision of the Council of Ministers regarding the program of nuclear tests in 1953. Click on the image to go to the full-size image at the atomhistory.ru site.

Among other things, the document provides some details about the amounts of fissile materials used in the first Soviet nuclear weapons. Below is a translation of the document.

It is clearly marked as "Declassified" on top of its original "Top Secret/Special Folder" classification. As it was the case with most documents at that level of secrecy, some words were written in by hand - the information was too sensitive to entrust it to typists. The hand-written words are in italics. The document does not refer to fissile materials by their actual names - plutonium is "tellurium-120" and uranium is "tin-115" (in earlier Soviet documents plutonium was referred to as "ametil" and uranium as "kremnil"). "Test site No. 2" is the Semipalatinsk Test Site. "Izdeliye" is translated as "device".

The Council of Ministers of the USSR HAS DECIDED:

1. To accept the proposal of the First main directorate of the Council of Ministers of the USSR (Zavenyagin, Slavskiy, Kurchatov, Pavlov) to carry out the following tests of the RDS devices at the test site No.2 in July-September 1953:

It is expected that the full TNT equivalent of the device will be no less than 250 thousand tonnes.

It is expected that the full TNT equivalent will be 25 thousand tonnes.

It is expected that the full TNT equivalent will be 9.2 thousand tonnes.

Here is where the first page of the document ends. Apparently, the document continues and describes at least one other test that was conducted in 1953.

This appears to be a working document - the paragraphs that describe yield estimates are marked by a blue pencil, as if someone decided that the decision should not commit to specific outcomes of the tests. It is also possible that the the estimated were revised later. The actual yields were indeed a bit different from the estimated in the document.

RDS-6s, the first Soviet thermonuclear weapon (this is the "Layer Cake" design), tested on 12 August 1953, yielded 400 kt - 60 percent higher than the first estimate. Apparently there was a reason RDS-6s was considered a prototype rather than a weapon ready for combat deployment.

RDS-4 was tested on 23 August 1953 in an airdrop. The yield of the explosion, 28 kt, was fairly close to the original estimate. This weapon would later become known as "Tatyana" - the first Soviet tactical weapon. (The online version of the list of Soviet nuclear tests gives the yield of this test as 23 kt. In the hard copy of that book as well as in other sources, the yield is given as 28 kt.)

The "hollow design" in the description apparentlymight be what is known as a "levitated core" design with a gap between the core at the center of the device and the imploding shell - at least this is the kind of design that was discussed in 1949. Or it could be the "hollow pit" design, without the solid core in the middle. [UPDATED: It doesn't look like it was the design described in the 1949 documents]. It is not clear what does the reference to a "normal neutron background" mean.