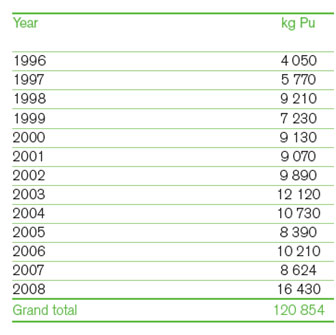 The Euratom Supply Agency (ESA) released its Annual Report for 2008. The report notes that "worldwide, around 15% of all spent fuel is reprocessed to recover and recycle uranium and plutonium," thus 85% of the spent fuel discharged is stored. Reprocessing plants in France, Japan, Russia and the UK operate only at about 50% capacity "due to uncertainties about the future use of the reprocessed material". ESA estimates that separated plutonium stocks "might exceed 250 tons before they start to decline after 2010 as MOX use increases, with MOX then expected to supply about 5% of the world's nuclear reactor fuel requirements."
MOX production worldwide since 1963 accounts for the use of over 400 tons of plutonium, ESA states. During 2008 MOX fuel containing a total of 16,430 kg of plutonium has been loaded into European reactors, a significant increase over the 8,624 kg in 2007 and a fourfold increase since 1996.
The table on the right, taken from the the report, details plutonium use in MOX fuel in the EU27 countries in 1996-2008.